We’ve seen quite a few Ridley’s harmonicas arriving in lessons recently, so we thought we’d give one a closer inspection. They’re manufactured in China for Wild & Wolf Ltd, of Bath UK and Lynchburg USA. Wild & Wolf specialise in household goods that have vintage appeal. Their packaging has the feel of 1950’s and 1960’s marketing, and their range of goods is chosen for simple value and durability. No batteries or apps!

Part of the Wild & Wolf range includes Ridley’s House of Novelties, a selection of toys and children’s gifts packaged the way parents and grandparents will remember. Representing good old-fashioned fun, a 10 hole harmonica has been included in the mix and, depending on where you shop, you’ll normally find this available for anything between £4.00 and £6.00 a unit. Ours cost £5.95 on Amazon UK, plus £2.65 shipping. A total outlay of £8.60. It goes for less.

Ridley’s harmonica is marketed alongside items like yo-yo’s, balloon modelling kits, pick-up-sticks and practical joke packs. Which prompts the question, is this harmonica a toy or a musical instrument? We found online reviews that favour both views. Some buyers saw it as a source of entertainment. Here’s an example: Cheap as chips and does what it says on the box. Sturdy, well made, durable – it’s a harmonica!

But what if you’re looking for something to use in music lessons or to play more seriously? Another reviewer wrote: The one I received could not be considered anything but a toy. It was hopelessly out of tune, and virtually useless. Swan harmonicas, at a similar price, 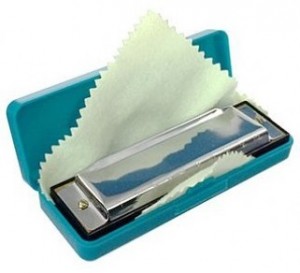 are better quality, and far more usable as a serious instrument. I would say, as a bit of fun for a child these are fair enough, but steer clear if you have any sort of ambition to play harmonica seriously.

The harmonica is certainly well built and will take a knock or two. It comprises a standard injection-moulded, black ABS plastic comb. This has recesses top and bottom, within which the standard metal reed plates sit; a good arrangement for promoting air-tightness in a harmonica. As is the fact that the reed plates themselves are held in place by no less than seven mini-screws. The moulded steel cover plates are have just one screw at each end, which is fine and are also recessed within the comb unit. They carry standard hole numbering on the top plate, no branding, and open backs on both for sound projection when everything is assembled.

The proof of the tin sandwich
When we used the harmonica, the melody notes in holes 4, 5, 6 and 7 seemed to play quite well and sounded bright. However, to the ear and with a digital tuner, 4D and 6B were slightly flat and not as satisfying as the other notes. Here’s what we heard..

The biggest problem came when we tried to play chords; one of the first things newcomers will do. The result was shambolic! Which is probably why the cardboard packaging motif states super honky tonk sound. We’ve never known the term honky tonk being applied to a harmonica. Honky tonk piano certainly; this has an endearing, out-of-tune jangle. What we found was neither super, nor honky tonk. Here’s what we heard..

From the sound file above, you can hear the chordal notes wavering, or beating as we call it. Especially at the lower end. This effect tells us the harmonica reeds are not in tune with each other, and not good for chord playing. Which, is probably why the term honky tonk is used on the packaging. This is

puzzling because, judging by the standard scraping on the reeds, some form of tuning has evidently taken place.

To highlight the problem more clearly, here’s what happens when we play two notes an octave apart. This technique is called octaving and it is the quickest way to check the tuning on any harmonica. We’re effectively picking out twin notes from the chords above, to see if they play sympathetically. The beating effect, becomes very apparent and is unappealing..

Another problem is that despite its favourable design features, the harmonica has an inherent leakiness. The feel was somewhat spongy, which makes hard going for beginners. As seasoned players, when it came to bend notes, we had to work hard, especially in 3D. We also found it impossible to play the last two blow bends 10B’ and 10B” as you’ll hear..

So what do you get for your money?

The harmonica comes in a nice sturdy case, with a small cleaning cloth. The starter information-cum-first tune sheet explains how to cup the harmonica with both hands, and how to play blow and draw notes.

The tunes chosen are Three Blind Mice and Home On The Range, two well know melodies. The triangle/circle tab for Three Blind Mice is missing some crucial repeat notes however, and doesn’t match the alliteration of the lyric. Home On The Range also has an unconventional ending. And while this may appear a little over-critical, the lack of attention to detail mirrors the poor quality control that dogs the harmonica generally.

Our conclusion
As with all things in life, you  get what you pay for. This is not a harmonica for the serious learner, although it is fun. The packaging says the harmonica is suitable for children 6 years and over. There’s nothing to say children under 6 years couldn’t knock out a tune given the chance, or at least enjoy a few hours’ safe amusement. If Wild & Wolf tidied up the tuning and corrected the information sheet this could be a decent starter instrument. Until then, it remains a toy.